Navaratri Puja begins on the Bhadrapada Amavasi day or Puratasi Amavasai day, a day before Navratri begins. Navaratri is a festival that lasts nine days and nine nights. The word “Navaratri” actually means nine (Nava) nights (ratri).Navaratri is the worship of the three divine goddesses, Saraswati (Goddess of learning and speech), Lakshmi (Goddess of wealth and prosperity), and Durga (Goddess of strength and courage). It is also said to be the battle that occurred between Goddess durga and the asura (demon), Mahishaasura. The battle lasted 9 days and 9 nights. Finally, on the tenth day, Goddess Durga killed Mahishaasura. This day is known as Vijayadasami. Vijayadasami means the 10th day of victory.First three days
The goddess is invoked as a spiritual force called Durga also known as kali in order to destroy all our impurities.
Second three days
The Mother is adored as a giver of spiritual wealth, Lakshmi, who is considered to have the power of bestowing on her devotees inexhaustible wealth, as she is the goddess of wealth.
Final three days
The final set of three days is spent in worshipping the goddess of wisdom, Sarasvati. In order to have all-round success in life, believers seek the blessings of all three aspects of the divine femininity, hence the nine nights of worship.Navaratri means nine nights. According to a Hindu belief, the last thought one entertains before one’s death determines the next birth. How does one have a sacred thought before death? It is possible through self- discipline. We sleep everyday. Sleep is similar to death except that we wake up. Sleep can thus be termed as mini-death. If we were to discipline our mind by invoking a sacred thought prior to sleep everyday, it will certainly help us thave a sacred thought during the time of death. Mahatma Gandhi said ‘Hey Ram’ before his death as he was self-disciplined.Nava also means ‘new’. If we invoke the blessings of Saraswati, Lakshmi and Shakti before going to sleep every night, we will experience newness every night. Night or ratri also means darkness. Darkness denotes ignorance. For this too, invoking the goddesses can prove fruitful.Through grace, our ratri or ignorance will vanish. Grace cannot be understood logically. It is a quantum leap in the field of consciousness. In physics, quantum leap is a great discovery. It involves electrons disappearing from one point and appearing in other point and between them there is no time gap. Hence it is called quantum leap. Similarly, in the field of consciousness, when grace descends there will be a quantum leap in us.During Navaratri, three nights of worship are assigned to each of the three Devis. Nava or newness in the form of grace is invoked. The tenth day is Vijayadashami, denoting victory – victory of higher consciousness through the blessing of the goddesses. The greatest victory is the dispelling of darkness or ignorance.Grace of the Devis always exists; it’s just that we should be worthy to receive them. The inner apparatus suitable to receive them is pure mind. Impure mind is like dirty muddy water, which cannot reflect the light of the moon. Moon exists but to reflect in water, the water has to be clean. This is called Pratibimba Nyaya. Our mind has to be pure in order to receive grace.Navaratri, therefore, is the celebration of removing ignorance. Our ignorance exists in the form of ego. E-G-O can mean Edging God Out. Hence we find Shakti dancing on Shiva’s chest. It may appear disrespectful but it is symbolic: An egoless Lord Shiva allows his wife to dance over him. It means Devi’s grace can descend in any form…but one should be available to receive it.Nava Durga 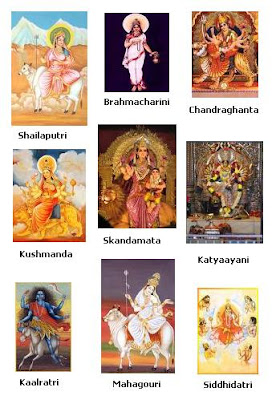 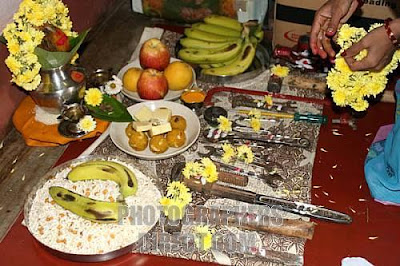 The ninth day is also the day of the Ayudha Puja. After the slaying of Mahishasura and other demons by Chamundeswari, there was no more use for her weapons. So the weapons were kept aside and worshipped. This Ayudha puja is being celebrated since ancient times. The importance of Ayudha Puja on this occasion may also be due to the fact that on the Vijayadasami day, Arjuna took back his weapons which he had hidden in a Vani tree in order to lead a life in disguise for the promised period of exile. It is believed that one who begins or renovates his learning to work on the Vijayadasami day will secure a grand success as Arjuna did in Kurukshetra war.The Ayudha Puja is a worship of whatever implements one may use in one’s livelihood. On the preceding evening, it is traditional to place these implements on an altar to the Divine. If one can make a conscious effort to see the divine in the tools and objects one uses each day, it will help one to see one’s work as an offering to God. It will also help one to maintain constant remembrance of the divine. In India it is customary for one to prostrate before the tools one will use before starting one’s work each day; this is an expression of gratitude to God for helping one to fulfil one’s duties.It is believed that beginning any business or study on the Vijaya Dashami makes the process successful.Saraswathi Puja 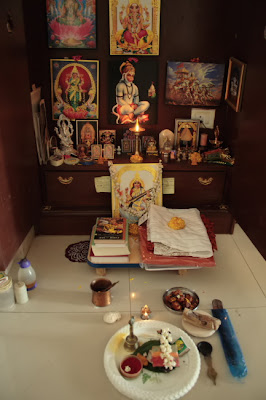 On Saraswathi (ninth day) puja day, we keep all books in the prayer room, evoke knowledge in the form of Saraswathi and do puja.
The following prayer is chanted to her before starting our studies:Saraswathi namasthubhyam varadae kaamaroopineeVidhyaarambham karishyaami siddhir bhavathumae sadaaI prostrate to you, Goddess Saraswathi. You give boons and fulfill our wishes. I pray to you to grant my wishes when I start my studies.
Goddess Saraswathi presides over and protects every form of art. So, on this day, consecrated to Saraswathi, the musical instruments in the house are cleansed, placed on an altar and devotedly worshipped, these being the abode of this Goddess.
‘Garba’ & ‘Dandiya-Raas’ 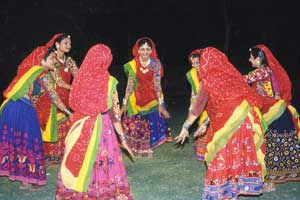 The word “Garba” originates from the word “garbo,” which is an earthen pot with holes and a small candle inside. During Navratri, a garbo is placed in the center of the dancing area along with idols of goddesses, and people dance around it in concentric circles. The pot itself symbolizes the universe, while the light inside represents God, which is the center of the universe, and by dancing around the pot and idols, the dancers symbolize that God is also the center of their lives. The circle formation itself also has additional significance. The circle formed by dancers represents the cycle of life and its never-ending nature, tenets of the Hindu belief of reincarnation. The dance form of Garba is characterized by its fluidity, grace, flexibility, and synchronous clapping of hands to supplement the music.Raas, with similar elements to Garba, is different due to its use of dandiya (dancing sticks) that are twirled, tossed, and thrown in elaborate choreography. It has similar roots as it is also performed at Navratri, but also has deeper significance as it is representative of Lord Krishna, who was said to perform the dance with village girls, or gopis, to please them. While each gopi believed that Krishna was dancing with her alone, he was actually dancing with all of them as he is a metaphor for the omnipresent God, supporting the central Hindu principle that God exists within anything and everything in this world.VidyarambaThe tenth day or Vijayadasami is also the day of Vidyaramba or beginning of study when children usually begin to learn the alphabets. On the Vijayadasami day after a Puja in the morning, the Books and implements are removed from the room and this ceremony is called ‘Puja Eduppu’. The time for the break up of the puja marks the beginning of learning and work. Learning and work commence at this auspicious moment.Literates, in general write the alphabets on sand and read a few sentences from sacred books. Similarly the craftsmen and other skilled workers do some work using their implements. At this auspicious moment the children for the first time are given instructions to write the first few alphabets on rice or sand. They are thus initiated into the world of knowledge. This is called ‘Ezhuthinu Iruthu’ and according to custom only after this ceremony child becomes entitled to write or read.Dussehra 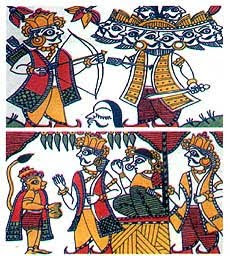 Dussehra is also known as Vijaya Dasami, because of the victory of Ram over Ravana. On this day in Satya Yug, Ram (the eighth incarnation of Lord Vishnu), killed the great demon and king of Lanka, Ravana. ‘Dash’ means ten and ‘hara’ means defeated.The festival of Dassehra, also known as Vijayadashmi, is one of the fascinating festivals of India and is celebrated with joy and enthusiasm. According to the great Hindu scripture, the Ramayana, Lord Rama performed chandi-puja (holy prayer). This was carried out in order to invoke the blessings of Durga Maa for the killing of Ravana, the ten-headed demon king of Sri Lanka who had abducted Seeta, wife of Lord Rama.Another legend associated with this auspicious occasion is the story of Kausta, the youngest son of Devdatt. After successfully accomplishing his study under the guidence of Rishi Varatantu, he requested his mentor to accept any gift as Gurudakshina. Though initially Rishi Varatanu refused the offer but afterward he asked for one hundred million gold coins for each of the subject taught, as Kausta learnt several subjects, it amounted to 140 hundred million gold coins. To keep his promise Kausta asked King Raghu for the money, who was renowned for his generosity. With the help of Kuber, the God of wealth, he brought a shower of gold coins near the shanu and apati trees. After giving what his guru asked for, the rest of the coins were distributed among the poor and needy people on the day Dassehra. Since then, people of Ayodhya pluck the leaves of apati tree and present each other as ‘sona’ or gold. Source: http://bharathkidilse.blogspot.com/2009/09/navaratri.html