Seventh Horse of the Sun

Suraj ka saatvaan ghoda..
Still remember this title from an obscure movie I had watched on Doordarshan as a kid. The movie by Shyam Benegal went on to become a classic and the phrase stayed put in some corner of my mind.. What could it have meant, the ‘7th Horse of the Sun’?? For that matter, why  have seven horses in the first place?

In Hindu mythology, Surya travels through the sky on a seven-horse, twelve-spoked chariot, driven by Arun (the brother of Garud), with its arrival heralded by Usha, As the Sun begins its apparent journey towards the Northern Hemisphere (Uttarayan) again, lets try to decode the mysteries of Surya and his chariot in the current post.

Surya on his chariot 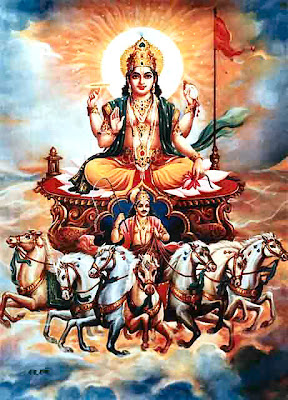 A lot of people might think that this motion of the Sun mentioned in the scriptures refers to the apparent movement of Sun from East to West, but that’s not the case.  Scriptures clearly mention that the Sun revolves NOT around the Earth but around Mount Meru!

If you check the post {Heaven at the North Pole} you will understand what it means.. Mount Meru points towards the Pole Star which, at the time scriptures were written, was a Star near the Galactic Center so effectively, scriptures indicate that our Sun revolves around the Galactic Center and NOT the Earth..  What an amazing insight!!

Uttarayan reflects the apparent movement of the Sun towards the Northern Hemisphere heralding the decline of winter while causing the opposite effect in the Southern Hemisphere. Earth revolves around the Sun with a tilt of 23.45 degrees and because of this tilt, it appears that the Sun travels north and south of the equator.

Sankrant reflects the change of Season 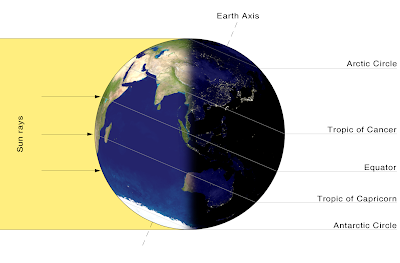 This in turn causes seasons which are thus dependent on equinoxes and solstices and the festival of Makar Sankranti heralds the onset of a glorious Sun and end of the harsh winters. In many parts of the country, it is also harvest time so the celebrations take form of the regional variants like Lohri, Bihu and Pongal.


It is interesting to note that the Indian calendar calculations began around 400 CE when Uttarayan & Makar Sankranti actually fell on the same day but since then a difference of 24 days has come in between! Today while Makar Sankranti still falls on the 14th of January the Uttarayan actually begins around 22nd of December, after the winter solstice.

Oldest Vedic texts describe Surya alongwith 11 other brothers collectively known as the Adityas. Adityas form a group of solar deities and are so named because they are the sons of Kashyap and Aditi. They form the main body of the Hindu pantheon and are comprised of:

Earliest scriptures actually mention 8 or 9 of them but later in the Brahmanas the number is given as 12. It isn’t difficult to understand that the 12 Adityas correspond to 12 months of the year!

According to Lokmanya Bal Gangadhar Tilak’s masterpiece called {Arctic Home of the Vedas}, the change in their number reflects the gradual migration of Arya rishis from near the Pole to the tropics after the Ice Age! As they migrated closer to the tropics, the number of months when Sun was up kept on increasing till they reached the Indian sub-continent.

Interestingly, in Chinese mythology as well, there were originally ten suns in the sky, who were brothers and were supposed to emerge one at a time as commanded by the Jade Emperor. The 12 Adityas were also adopted into Japanese Buddhism as guardians of the monasteries covering the four main directions, four semi-directions, above, below and the Sun and Moon. They are known as Devas or Ten 天 in Japan (which literally means Heaven or Celestial). 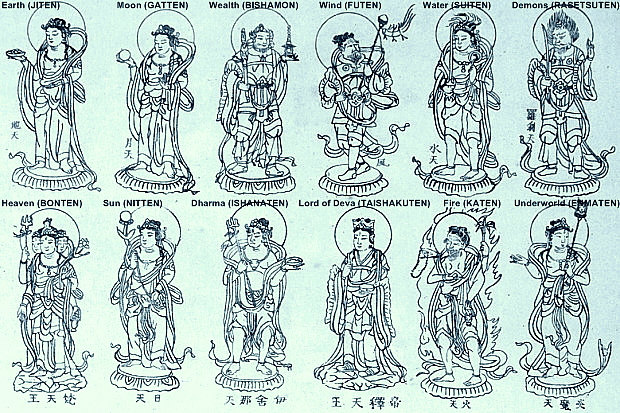 A similar depiction is found on a rock-cut cave far away in Yazili Kaya in Turkey! This rock-cave has multiple depictions of Gods and Goddesses that resemble Hindu gods. The lower chamber in this cave shows a frieze with 12 gods carved onto it who were worshiped by the people known as Hittites.


The 12 Adityas from Turkey

Moving westwards, it is also worthwhile to note that in most Indo-European religions, the gods worshiped were more or less the same. Thus, the Greeks called their Sun-god Helios while others named him Apollo. 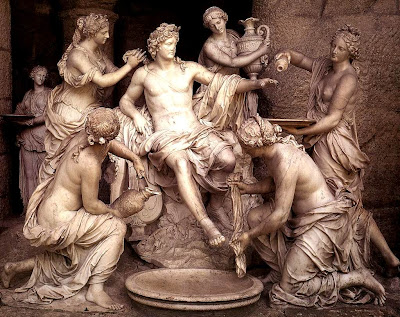 For the Romans, the cult of Sol Invictus or ‘Undefeated Sun’ was supreme. Roman Emperor Constantine adhered to it so much that even when he embraced Christianity, he changed the day of Sabbath from Friday to SUN-day!! 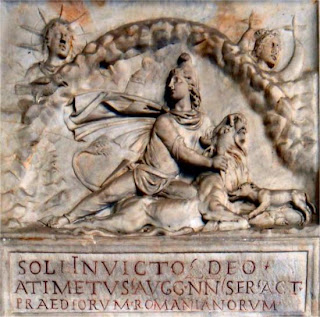 During the heyday of the Roman Empire, there was also a grand festival of the birth of the Unconquered Sun (Dies Natalis Solis Invicti) held on the Winter solstice on December 25th. This was a sort of ‘Rebirth of the Sun’ and the same date was later transferred to the ‘Birth of Christ’ even though Jesus was actually born on the 4th of January!!

The worship of Surya was prevalent in other ancient civilizations of the world as well. Mayans (who scared the World with their 2012 Doomsday prophecy) called him Hunahpu. The Aztecs named him Tonatiuh, Japanese revered him as Chupkamui, and the Babylonians called him Aja.

The Egyptians worshiped Sun in the form of Re/Ra. In Egyptian myths of the afterlife, Ra rides in an underground channel from west to east every night so that he can rise in the east the next morning. 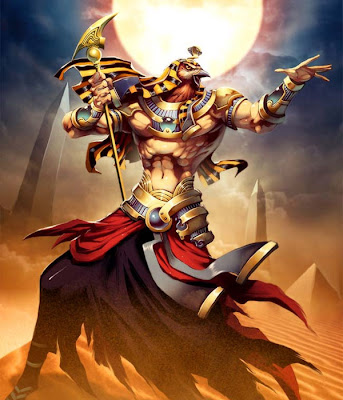 In Vedas, Surya is considered in high esteem and is referred to as Surya Narayan and at various times, as the eye of Mitra or Varuna, the cosmic law-keepers. The same is reflected in Zoroastrianism where the Sun is described as the ‘Eye of Ahura’.  In India of course different dynasties trace their lineages from the Sun with Shri Raam as a descendant of Surya, thus belonging to the Suryavansh or the Solar Dynasty. The Ramayan also declares Surya as the father of the Vanar King Sugriv just as the Mahabharat describes Karna, as the son of Kunti and Surya. Perhaps, amongst the Aryans, the blonde, blue-eyed lineages migrating from the Steppes represented the Descendants-of-the-Golden-Sun!  Hindu Sun-god Surya 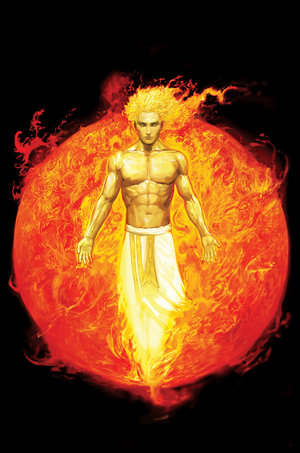 Surya has two wives Sangya and Chhaya (literally the shadow) and through them has the folowing children: Shani (Saturn), Yamraj (Lord-of-Death), Yamuna, Tapti, Ashwini Twins and the eldest of these Vaivasvat Manu, the First Man in the current Age or Manvantar. {For more on the First Man Manu/Adam check the following post – Manu, the First Man} However, this is NOT TO SAY that the ancient Indians thought of the Star called SUN as a demigod and did not understand its true significance! Various Hindu astronomical treatise describe the heavenly bodies as planets or Lokas ruled by different deities.   Surya-Loka, abode of the Sun-God

The Shatapath Brahman [7.1.1.37] states that – This World (Earth) is verily spherical and while installing the Garhapataya altar the ritualists meditate on the same. Similarly, the shlokas [7.4.1.10] and [9.1.2.40] describe the Sun as spherical. The Surya-Siddhant [12.12-29] expressly states that the Universe itself is shaped like an oblong sphere! The references to Surya’s chariot, in a similar manner, can provide us not only information about the ancient Hindus’ religious and cosmological beliefs but also about their Science and Astronomical acumen! (You can find the Sanskrit version at this link {Surya Siddhanta.pdf} and the English version here {Surya-Siddhanta English.pdf}).   Chariot of the Sun-God Various scriptures describe the Celestial chariot of the Sun. Rig Veda [1.35] says: आ कृष्णेन् रजसा वर्तमानो निवेशयन्न अमृतं मर्त्यं च ।
हिरण्ययेन सविता रथेना देवो याति भुवनानि पश्यन ॥ Throughout the dusky firmament advancing, Laying to rest the immortal and the mortal, Borne in his golden chariot he cometh, Savitar, God who looks on every creature.

Most scholars believe the seven horses represent Seven days of the week. Ancient Indians were great astronomers and this could very well be true. However, I believe, the seven horses probably also represent the Seven colors of Sunlight!

There are two reasons I believe this is the case – One, the seven horses/mares of Surya’s chariot are ALL of DIFFERENT Colors; Secondly, many times, they are represented as One horse/mare with SEVEN HEADS! If this is not an allegory to White light splitting into seven colors, I don’t know what is :o)

The seven horses of Surya? 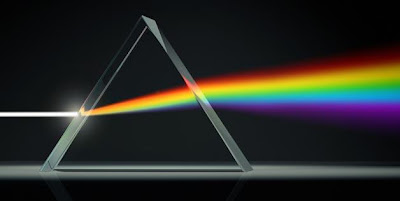 Other scriptures talk in a similar vein and describe the chariot of the Sun-god in much detail. Although Arun-deva sits in front of the sun-god and is engaged in driving the chariot, he looks backward toward the sun-god. The chariot has a SINGLE wheel with 12 spokes and is yoked to seven horses.

Sixty thousand saintly persons named Valkhilyas, each the size of a thumb, are located in front of the sun-god and offer him prayers. The Gandharvs and Pannags sing in front of him, Apsaras dance before the chariot while Nishachars and Yakshas follow and guard it. These seven groups of fourteen associates arrange the proper times for regular snow, heat and rain throughout the universe and are responsible for maintaining the Seasons on Earth!

Chariot of the Sun from a Tanjore painting 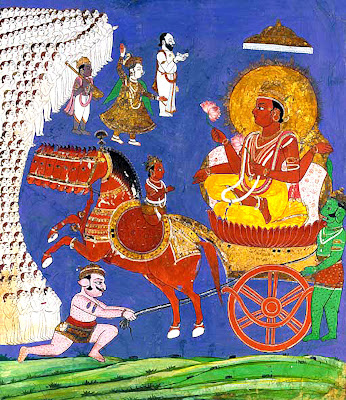 Not surprisingly, a similar description is found in the description of Greek/Roman Sun God Apollo’s journey across the sky and I found a very similar picture depicting this journey through the Heavens.

Scholars have used such references to calculate the speed of rotation of the Sun as well as its revolution! The Devi Bhagawat Puraan elaborates further in a description of Mount Meru and its surroundings:

O Nârad! Mont Meru is situated towards the north of all the Dvîpas and Varshas. So whenever any person sees the Sun rise he calls that side “east.” If the Sun travels in 15 (fifteen) Ghatikâs, the distance from Indrapurî to Yamapurî, He is said to travel within that time a distance equal to 2¼ Kotis, 12½ lakhs and 25000 Yojans (22695000 Yojans).

Here, we also find the relevance of other aspects of the Sun’s chariot. The SINGLE WHEEL of the chariot represents ONE YEAR or the Samvatsarwhile the 12 spokes represent 12 months! The THREE-naves of the wheel more likely than not represent the three points of an elliptical orbit!

All these poetic allegories thus give a glimpse into the scientific acumen that the ancients had. The reference to Saturn (Shani) being the Son-of-Surya could even be a reference to the planet having been formed from a chunk of the gases escaped from Sun’s own body mass! (Just like the Sun, Saturn and Jupiter are also gaseous giants unlike other planets of the Solar System). 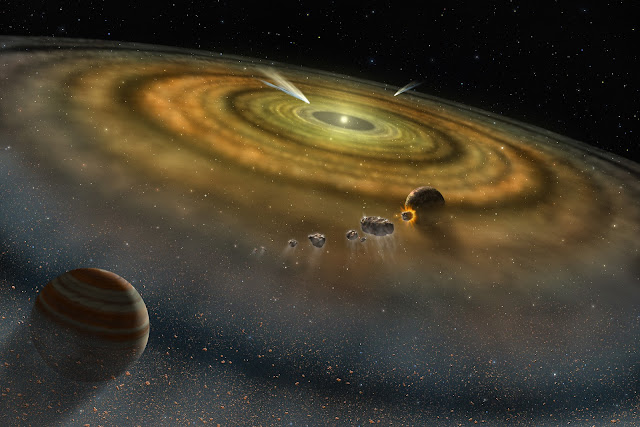 Without the Sun, we wouldn’t have existed.. not only because of the Solar energy it provides but the planets including Earth wouldn’t have taken form without the gravitational power of the Sun!

Our Earth is really tiny compared to the Sun and to share another interesting allegory, you would be surprised to know that the Sun-Earth distance is roughly 108 Sun diameters and the diameter of the Sun itself is 108 times that of Earth. The ancient Rishis and Magi of Hinduism quite possibly knew this relationship as most Gods/Goddesses have 108 names ascribed to them!!

This Sankrant, let us bow to the sages of yore and their (literally) out-of-the-world insight while sending a prayer of thanks to the Sun-God who maintains our Solar System. Wishing everyone a Happy Uttarayan & a very Happy Lohri/Bihu/Maghi/Pongal and Makar Sankranti :o) 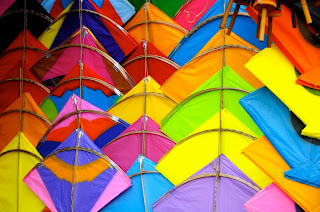 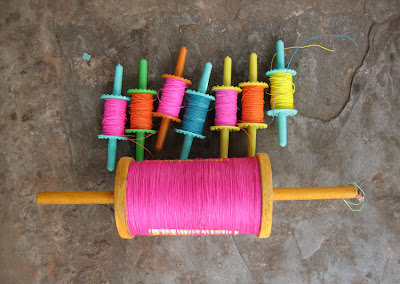 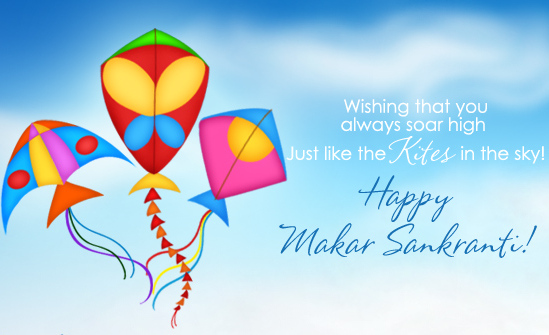 Manager by profession, Doctor by qualification; Artist by temperament.. Love traveling to new places and exploring different cultures.. Reading, Photography, Sketching, Movies n Numismatics keep me lost in a parallel Universe.. Fascinated by the Science hidden in ancient mythologies of the World and love exploring their connection.

This author does not have any more posts.